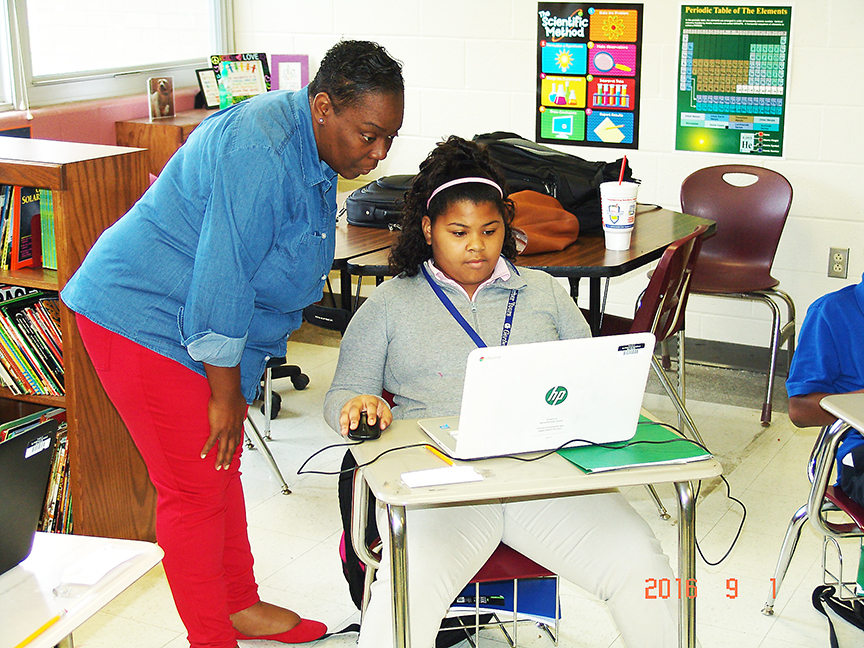 Felicia Turner, computer lab technician at Blytheville Elementary School, watches as a fifth-grader performs a math activity on a Google Chromebook last week. The students’ chromebooks are just one of the district’s technological advancements.

To the teachers and administrators of the Blytheville School District, absolutely all accomplishments are done so that every student, from pre-kindergarten through the 12th grade, learns. With that in mind, Kris Williams and Allison Turner discussed a few technological improvements that students and their parents are taking advantage of.

Williams, the district’s Technology director, emphasized the Google Chromebooks that each student from the second-12th grades already has access to. He said that all Blytheville High School students have received chromebooks that may are used in their daily studies and also taken home at night. “The chromebook’ operating system is made by Google, has Internet access and functions with thousands of educational apps,” said Williams. “This allows easy collaboration with both the student and the teacher.”

He stated that this has been a four-year implementation, including 300 brand-new devices that will be split between BHS and Blytheville Middle School. In all, Blytheville students are using 1,850 chromebooks. The BHS students turn their chromebooks in at the close of the school year and receive the same one the next school year.

BMS students also receive chromebooks each day, but they remain at the school and are charged at night so that the students will have them when school begins the next morning. Students at Blytheville Elementary School and the second-graders at Blytheville Primary School have classroom sets of chromebooks, and those are distributed any time a teacher discusses a topic or activity that he or she believes will be enhanced with their use.

“We have younger students every year who are becoming accustomed to using technological devices, and later on when those students attend BMS or BHS, they will be well-prepared for the educational technology that exists at that time,” Williams added.

He went on to say that out of 720 chromebooks issued to BHS students a year ago, only five were not recovered, which is less than one percent.

Williams said the district is also in the process of upgrading its wireless network to the latest technological standards, which he said would handle all future device growth for students and teachers for years to come.

The Home Access Center, which for several years has allowed for students and parents to check their children’s grades and attendance, has been supplemented with a new mobile app, “eSchoolPLUS Family”. It is for both iPhone and Android devices, and can be downloaded at the Google Play Store or Apple App Store. The app coordinates with the student’s information, grading and attendance systems. Parents and students can use their HAC username and password that have been issued previously to access the new app. Any parent who does not have their login to “eSchoolPLUS Family” may go to the Blytheville School District website to request one.

The district’s website has also updated to a new look; it is still located at www.blythevilleschools.com Turner, the district’s Community Development coordinator, said that the website presents a cleaner, more organized approach to school activities. Individual school sites are also available, where both the student and parent may go to search for events pertaining to just that particular school.

Also, each school as well as the district has both Facebook and Twitter accounts, allowing everyone to see pictures of events and classroom activities.