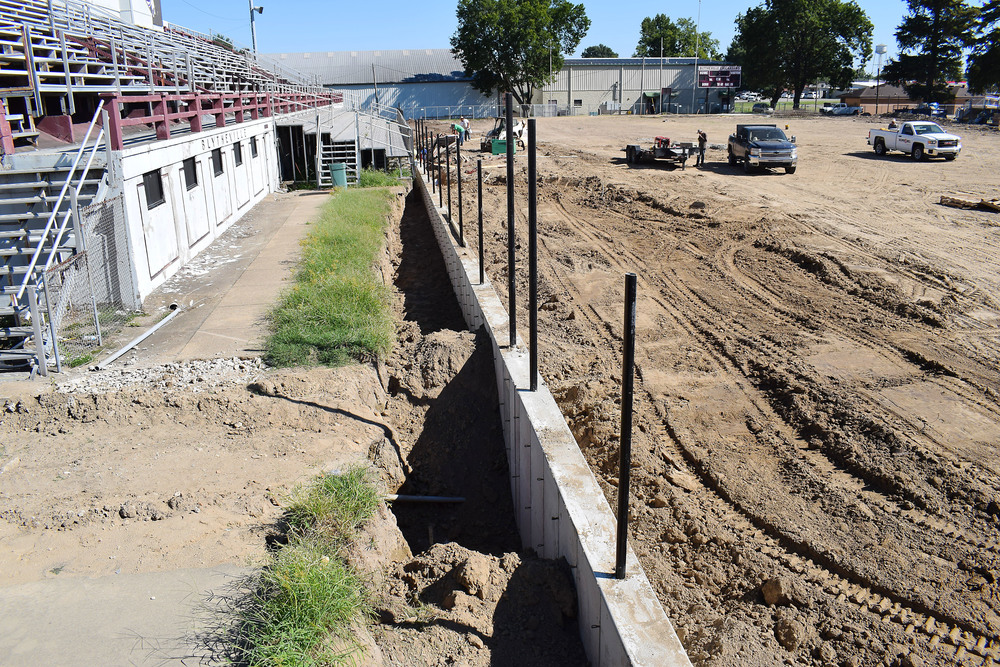 Blytheville Schools photo/David Cooke
Baldwin-Shell employees put finishing touches on the retaining wall that now encompasses Haley Field. It was the second of a five-step phase that will result in artificial turf being laid all around the field thanks to the passing of the millage in June that will result in substantial improvements to the athletic facilities and raises for all of the Blytheville School District teachers. The first home AAAAA-East game for the Blytheville Chickasaws will be Sept. 29.

Approximately one-fourth of an inch of rain fell Monday morning at Haley Field, enough to make things “sticky” for Baldwin-Shell Construction personnel but not enough to keep them from doing their renovation work. What Randy Jumper is hoping for now is that the rain, expected here toward the end of the week, will hold off until at least Wednesday night. If that can happen, the Sept. 29 date for the re-opening of the field should still be on schedule.

Jumper, the district’s director of Operations, stated that the first two phases of a five-phase system for renovating Haley Field are complete. “Baldwin-Shell Construction spent time leveling the playing field, and the concrete retaining wall that goes around Haley Field was just erected,” he said. “It’s the basic border of the field so it has to have a retaining wall; it’s similar to putting a picture inside a picture frame.”

He went on to say that the third phase will be mixing the soil and cement together, with construction personnel covering the field with eight inches of the powdered cement.

“The rain put us a couple of days behind schedule, but the dirt-cement mixture will arrive Wednesday morning, and the construction people will spend that day doing that,” said Jumper. “Once it begins to rain, there’s not much that can be done about that. The main thing is to hope the rain holds off for at least another 24 hours.”

Jumper then said that a Wirtgen integrated mixer would till the concrete and dirt eight inches into the soil. When that is done, a water truck will come to wet down the field.

Shortly afterward will be the laying of the pad and the artificial turf, but Jumper said those two phases will not be completed overnight. “The pad and carpet will be installed in five-yard strips, from one end of the field to the other,” he said. “The pad will be installed (in strips) and then the carpet, and the strips will be laid together by a big ‘sewing machine’. The colors of the end zones, the logo at midfield and even the yard markers will be part of the carpet; no school employees will have to paint the field.”

He added that 22 days will be needed to completely install both the pad and the turf, so little time will exist to get the field in pristine shape for the Chickasaws’ Sept. 29 AAAAA-East opener against Nettleton.

The last phase for Baldwin-Shell Construction is to put hundreds of thousands of very small rubber balls (each about the size of a pin head) on top of the artificial turf. Jumper said those rubber balls add a little more cushion to the impact of players being tackled on the turf and also keeps the turf “grass” from eventually laying down. He added that a “groomer”, an implement that Jumper said was included as part of the millage passed by voters in June, will be used regularly by district employees to keep the Haley Field turf in excellent condition.

New goal posts will be installed at Haley Field, and the stadium will also receive a brand-new coat of maroon and white paint for the first kickoff of the campaign.