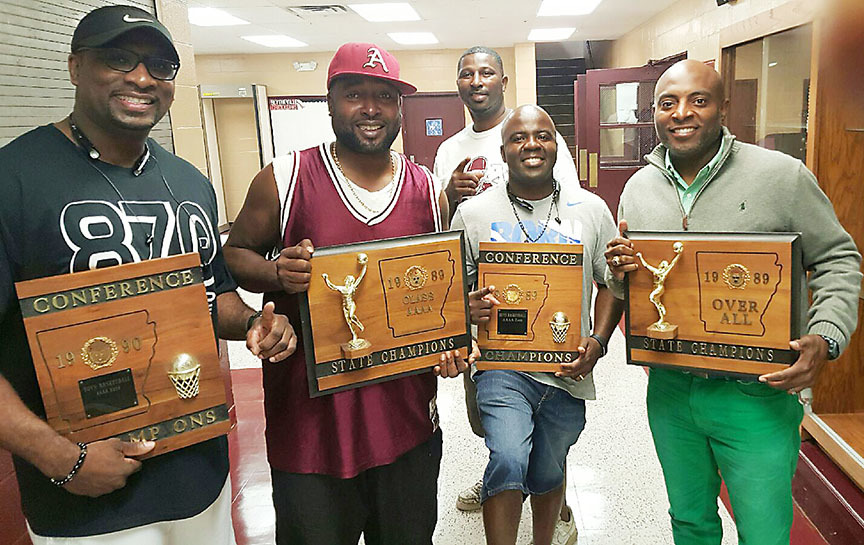 Marty Granderson (left) is holding the trophy the Blytheville Chickasaws won for finishing first in the AAAA-East in 1990 with a 10-0 record for the third consecutive season, and Fred Haynes, Rickey Jackson and Barry Jackson are all holding conference, state and Overall trophies earned by the 1989 Chickasaws. Behind them is Paul Fowler, who joined the Chickasaws in 1990.

Don’t blame the 1989 Blytheville Chickasaws if they didn’t exactly set the world on fire with their “Phi Slamma Jamma” way of scoring points. They weren’t known for their fast breaks and triple-digit capabilities. What’s important is the Chickasaws had a way of thwarting teams that did have those backgrounds, and it carried them all the way to state and overall tournament titles that year.

The Chickasaws won with defense - aggressive, in-your-face, stifling defense. They could score points when they had to, but in some games they scored just enough to win. The thing is, though, they won. They always won. Playing the Chickasaws from the mid-1980s through the early 1990s, even scoring against them at times, was like swimming through molten lead - painfully impossible.

Their head coach, Danny Ebbs, built in Blytheville what at that time was the most revered program in all of Arkansas. He left Blytheville after the 1990 season to become the head coach at Henderson State University, and he remained there for two years before working for various public schools in Arkansas for another 20 years. Today he is the athletic director for all Pulaski County Schools, which includes Sylvan Hills, Maumelle and J.T. Robinson high schools as well as Mills University Studies.

“That 1989 overall championship was the product of a program and tradition that was built before the players even got there,” stated Ebbs. “Although 1989 was the best Blytheville team I ever had, the program was already very successful. That team just made it better. The kids had already established a great work ethic.”

The Chickasaws were defending state champions in 1987 and defeated Marianna in the semifinals to set up a showdown with the Fayetteville Bulldogs - on Fayetteville’s own court. Blytheville wound up losing to the Bulldogs 57-49, but that established the beginning of a defensive tradition that would propel the Chickasaws to tremendous glory just two seasons later.

The ’89 Chickasaws’ overall championship was the third for Ebbs, who also won in 1977 with the Stephens High School Lady Roadrunners and in 1979 with the Parkdale High School Dragons.

The 1989 Chickasaws finished with a record of 30-3, including a flawless 10-0 record in the rugged AAAA-East. They also won the NEA Tournament by stifling Ridgecrest (soon to be Paragould) 58-45 in the title game. In the AAAA finals at McFadden Gym in Pine Bluff the Chickasaws edged fellow league rival West Memphis 49-48 in overtime. Ed Cullins, one of only three senior BHS team members, earned State Tournament Most Valuable Player honors despite scoring a mere five points against the Blue Devils. Blytheville’s triumph over West Memphis was its 13th in a row and 19th in its last 20 games.

The Chickasaws worked past Fort Smith Northside 52-49, with the Grizzlies coming into the game as the No. 1 club in all of Arkansas. Blytheville beat El Dorado 57-49 in the quarterfinals, and in the first round the Chickasaws ran from North Little Rock Northeast 72-60.

The AAAA champion Chickasaws defeated Class A champion Delta 78-73, and against a strong AAA champion Malvern club the Chickasaws proved why they were the best team in the state, winning 56-41.

The defending champion Chickasaws again had a strong campaign in 1990, defeating Forrest City 58-53 to go to 10-0 in the league once again (they were also 10-0 in 1988). Blytheville did lose to West Memphis 52-46 in the NEA Tournament finals, but in the AAAA State Tournament at West Memphis the Chickasaws whipped NLR Northeast again 76-63 and Little Rock Parkview 77-65. In the semifinals against the Blue Devils the Chickasaws fell 55-54 when Barry Jackson fouled a Blue Devils player and that player hit one of two at the free throw line. The Chickasaws tried to score in the waning seconds, with West Memphis knocking the ball out of bounds with just three seconds to go. Blytheville’s inbounds pass went to Fred Haynes in three-point territory, and he was forced to try a long shot that failed, and West Memphis, though they would lose to Pine Bluff the next night, finally exorcised the demons that had inhabited their souls for two years. Later in the offseason Ebbs would resign to take the HSU job.

David Hixson played at Arkansas Tech University from 1982-84 and became an assistant coach for Ebbs when Ebbs went to Blytheville for the ’84-85 season. And when Hixson sees what the ’89 Chickasaws have become as men, well, he is not all that surprised. “The program that Coach Ebbs and I established in Blytheville was based on players doing exactly that (succeeding in life) when they got older,” said Hixson. “It was a matter of developing life skills that are required to be successful, and that group (of players) exemplified those characteristics more than anyone. Those players made it a point to be successful, and that is what they’ve become.”

“Where Are They Now?”

A listing of the 1989 Blytheville Chickasaws and what they are doing today:

“The reason our basketball team had so much success was because of our genuine love for each other,” Jordan, an ’89 junior, said. “Some of us may be many miles away, but we are still really close friends and we have that bond that all former Chickasaws have. I’ve been asked before if I would be willing to live my high school days over again, and, yes, if I had that opportunity I’d go back to those days in a heartbeat!”

When told that Ebbs labeled Hixson “an extremely capable coach” as his assistant, Hixson was quick to recognize Ebbs’ impact on his career - and life. “I owe everything to Danny,” he stated. “I was very honored when he asked me to be his assistant coach, but he also knew what he was getting when he asked me. Together, we just wanted our players to have the kind of impact that apparently they have had. Coach Ebbs was one of the great ones, and if I am fortunate enough to have the same kind of impact on players that he had, I would be extremely happy.”

Hixson became head coach in 1990-91 after Ebbs left, and he directed the 2006 Chickasaws to a 29-1 record and championship in the AAAA State Tournament in Little Rock. At the end of the 2011-12 campaign Hixson stepped down and is now Blytheville’s athletic director.

Ebbs said that the strengths of that 1989 team were “toughness” and “togetherness. I’ve had some very good offensive teams, both in Blytheville and at other schools I’ve coached at,” he added. “Never, though, had I had a team that compared defensively to what these 1989 players did together. They were a bunch of ‘tough-working fools!’”

EDITOR’S NOTE: Much appreciation is expressed to Barry Jackson, Charlie Sullivan and Fred Haynes, all members of the 1989 Chickasaws, for their assistance with this story, and to former assistant coach David Hixson for providing a copy of the state and overall 1989 Chickasaws team photo.